The Demo Team (internally dubbed DT) is a fun and challenging program for Northern Shaolin Kung Fu students who have passed the Beginner Level test in Our Curriculum.

Demo Team members have the opportunity of advancing their Kung Fu knowledge and skills through this special and regular event. Think of this: regular students, who come to their regular classes, get a certain amount of training. Hopefully they’re training outside of class as well. But the Demo Team members also get additional training times.

Not only that, but they also have the opportunity to learn advanced and / or additional material. For example, during the year of 2017, our Demo Team got to learn some Chang Quan or Longfist movements.

Keeping this in mind, however, should now shed light on why we have some minimum requirements for membership on the team. We don’t want DT members to have their usual studies, practice and progress to be messed up by the Demo Team. Members have to keep everything in their respective mental boxes, so to speak.

What is the Demo Team? 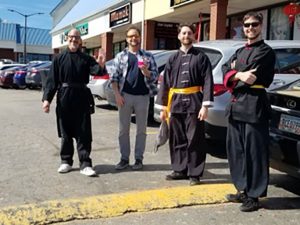 “Demo” is short for Demonstrations and Team…Well, I think you’re familiar with that one.

Having secured a good Kung fu foundation in their Beginner Level training, Deam Team members meet a couple of times per week, outside of normal classes to learn, practice and prepare for upcoming Demonstrations, for example Chinese New Year celebrations.

When does the DT meet?

Currently, we meet on Sunday afternoons, from 2:30 P.M. to 3:00~3:30 P.M., just after the Northern Shaolin Kung Fu class. The start times are set, but sometimes the practice sessions go a bit longer or shorter.

Throughout his martial arts career, Sifu Kiessling has given many Kung Fu demonstrations – by himself, with his Sifu, with his fellow students, with his students…

And as you may have guessed, for a variety of celebratory gatherings.

Check out Video Time Machine! Back to CNY 2013.

Having fellow Kung Fu teacher friends, we were invited to join in CNY (Chinese New Year) celebrations at schools, by showcasing bits of our Kung Fu, via Demonstrations.

More often than not, these demonstrations consisted of Sifu giving a short explanatory speech, showing a Northern Shaolin Kung Fu form or two, and with the aid of a student, showing a few martial applications from those forms. This format is easy, needs no practice nor set up, however it’s not all that special.

And then we started getting more and more invitations for a variety of events. It quickly became obvious that our current format would have to change, become more organized and that we’d need to have some strategies and choreography.

So Sifu got together with some of the senior students and they came up the Demo Team concept, as a way of meeting some of our Goals.

To have a reliable and consistent group of students as members of the Demo Team. To have several choreographed “sets” to use for a variety of reasons, in differing locations, with different set-ups (audio? indoors? outdoors? small or large area?). To get a to a point where we can start saying “YES,” instead of no, to the vast array of invitations and requests we get for Kung Fu demonstrations.

We simply want to Up our Game. 🙂